MattLewisMedia.com is the one-stop shop for all your new media needs.  Matt can cook you up a serious video advertisement, a goofy animation, a flashy logo, or a memorable music theme at the drop of a hat.

Need some work done?  Contact Matt with your project details and we’ll get the ball rolling. 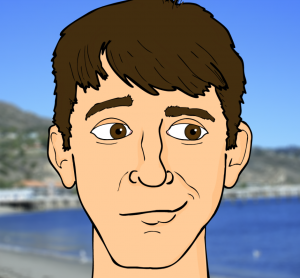 Warning: Self-portrait. Squareness of jaw may be moderately exaggerated.

Matt grew up in the suburbs of Boston where he miraculously retained the ability to pronounce the letter “r”.  He majored in biology at Davidson College.  If you ask him to name his greatest collegiate achievement he should say, “being published in the Journal of Neuroscience“, but instead he’ll most likely brag about how he almost made a $10,000 half court shot on ESPN-U.

As a music minor at Davidson, Matt took a digital music class that served as a gateway into video editing.  He went on to attend Boston University where he received his MS in Television Production (while continuing to fend off that wily Boston accent).

He’s spent the last several years in Los Angeles working as a freelance Production Coordinator on video shorts, TV shows, and feature films for companies including Funny Or Die.

Matt currently lives in Portland, OR where he creates original videos, animations, and music for a variety of clients.  To start your creative partnership with Matt, contact him here.